This is an older interview originally published under the Modern Filmzine flagship and has been edited for publication.

“A friend turned me on to a Sherbet cigarette and a Lenny Bruce  record,” Chong said in a phone interview. “It changed my life.”

Lenny Bruce, the great comedian with a reputation for stirring trouble, was an inspiration to the young Chong, he said.

“He’s the first comedian I heard when I smoked a joint,” Chong said.  “That’s how I knew Lenny, from the records. I never saw him live. I sat outside a club  he was performing at but I couldn’t go in because I couldn’t afford tickets.”

Now, Chong has had his own comedy career which has inspired another generation of comedians. With his partner, Cheech Marin, the two produced a series of comedy albums, which are now being adapted into  “Cheech & Chong’s Smokin’ Animated Movie.”

Cheech and Chong created nine albums from 1972 to 1985, and were nominated for four Grammy Awards, according to their Website. They won the Grammy Award for Best Comedy Album with their third album, “Los Cochinos,” released in 1973.

Eric and Branden Chambers, of Chambers Bros. Entertainment,  directed the animation and created the concept that uses the Cheech and Chong albums.

“They are doing a series of our old record bits that we recorded in the 70s and then they are going to connect them with a little story-line, much like in [the animated movie] ‘Ice age,’which had the little squirrel trying to hide the acorn.”

Chong said the movie will feature their voices, but they didn’t need to be in the studio recording any new bits. That was part of the deal made by Cheech and Chong in order for the movie to be made.

“It’s called mailbox money,” Chong said. “You get a check for shit you did years ago.”

Chong said he and Marin were still pretty involved in the project.

“We are like quality control,” Chong said. “We make sure the characters are representing what we had in mind. But they are pretty close to everything. I like it, but Cheech really loves it.”

exclusive deal was made with music mogul Lou Adler, owner of Ode Records, for the animated movie rights to the classic Cheech and Chong library of recorded comedy content.

“Lou is quite a perfectionist,” Chong said. “That’s what is going to really drive this to the top.”

Chong said the animators are going for a simple cartoon design for the movie.

“It was more of an economic factor,” Chong said. “Animation can become incredibly expensive. They sort of looked at ‘South Park’ and stop motion animation and it works so well with us because there is so much going on audibly that you don’t need your characters running around.”

The animated feature will display the talents of Cheech and Chong together, but for many years the two did not work together. They have only recently been working together with a stand up comedy tour.

Chong said the two split for a while because of their careers going in different directions.

“Cheech and I always got along when we were creating,” he said. “The only time we never got along was when we weren’t working. We sort of burned ourselves out.”

Chong said their success did have its price.

“People get one movie in their career, some people call themselves lucky,” Chong said. “We ended up with seven on our own. The well ran dry.”

Chong said that the two also split up because of a difference in philosophy.

“I had the stay true to your character kind of point of view,” Chong said.  “Cheech, more or less, he wanted to do straight acting gigs. he wanted to act with Kevin Costner, Robert Rodriguez and Don Johnson and do voiceovers.”

Marin went on to do a voice in the Disney movie, “The Lion King.” But Chong wouldn’t have any part of it. Again, he stuck to his own personal principals, despite turning his nose up at a lot of money.

“I turned down that Disney movie, because I didn’t really want to be associated with Disney, which was probably a big mistake,” Chong said. He added why he didn’t care for Disney.

“They wouldn’t let me in the park one time because I wore a t-shirt with Pluto butt-fucking Mickey Mouse,” Chong said. “They were a little upset about that. I was not a Disney fan.”

Chong said the years from Marin helped the two comedians when they finally got back together.

“Cheech went his way and I went mine and thank God we did because he learned what it was like to be a straight actor and do his thing and I went back on stage and did comedy with my wife,” Chong said.

Chong said after so many years it was only a matter of time before he and Marin were working together again.

“Our careers kind of petered out at the same time,” Chong said. “I was doing standup with Shelby, and Cheech did [the movies] ‘Cars’ and ‘Beverly Hills Chihuahua’ and bit parts as a priest. And once you start doing priests in a movie that’s sort of a death sentence. Not only are you a man of God but you can’t hit on any chicks.”

“So many acts could never get back. The Beatles never got back together,” he said. “It was a real challenge to see if we could do it.” 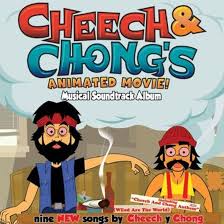