Author E.B. Hood will be at the May 31 Kaleidoscope Cultural Arts Fest from 12 p.m. to 4 p.m. in downtown Kannapolis.

E.B. Hood is the author of the “Melabeth the Vampire” series which can be found on Amazon.com or at the Literary Book store or Dead Ed’s, both in Salisbury. Visit www.facebook.com/MelabethTheVampire for more information.

My brother’s passing, nearly five years ago, has profoundly changed my life. Nicholas Hood was 31, and his death unexpectedly brought forth a passion in me, a passion for writing.

Nick and I had always been close, even as children. As adults, he was my closest friend and second father to my children, Tyler and Cory. Most trips and outings with my boys, Nick would be there and so it was the four of us. I was different with him than any other person on this planet.

There is a side to me, a side full of stories and ideas, that I was never willing  to share with others. My brother’s goal was to become a writer. Talking for hours upon hours about stories we made up, we came up with worlds and the rules to those worlds. We challenged each other, revising our ideas. My brother loved fantasy, wizards and elves. Whereas most of my imagination was about monsters under our bed. 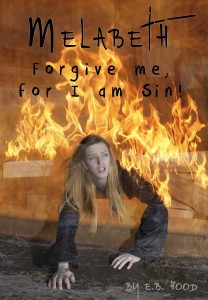 I always leaned to the fantasy world weaved into the background of reality. A lot of the ideas for my books were formed in my mind as I stood on the porch conversing with my brother. His influence is throughout my writing, for my world is full of wizards and magic as well as my monsters. Nick had always had a short term memory and back then we thought it to be part of his personality. Now that I look back I am not so sure. It also may be the reason he only finished one short story. I proudly added it to the end of my second book.

During the summer of 2004, my brother had a Grand Mal seizure. He was rushed to the emergency room. We were blessed that the doctor on staff took Nick’s symptoms seriously enough to have an MRI. He discovered a brain tumor.

From that point on, time had no meaning. Life became a whirlwind of hospitals and doctors. If you have ever had to help someone through a major illness there’s little else to be said, but if you haven’t, I declare that it’s indescribable.

By the grace of God they removed his first tumor, followed with some chemo and some more short term memory loss. Six months later, if not for the scar across the side of his head, you would have never known how close my brother came to dying.

Nick spent four years in remission after the first surgery. Every three months he had another MRI, every three months we prayed that the cancer would not return. In 2007 my wife, Betsy and I had a baby girl, Sonja.

December of 2008, I found myself laid off and became a stay at home father. That year I stayed home with my daughter while I started up my own IT business to help keep the lights on. I found out there was a bigger reason to have a flexible job… my brother’s tumor had returned.

The nightmare of doctors, hospitals and sleepless nights had befallen my family. It was much worse than the first time and I am thankful for the fact I was available to help my parents.

Again Nick went under the knife to remove a second brain tumor. This time the news was not good. They couldn’t remove the tumor. 2009 was my last year with my brother. Eventually he became paralyzed on half of his body. He went so fast, day after day we watched him decline. That last sign of life before he went was in his eyes.

His eyes would follow my daughter around the room, for he had fallen head over heels for his niece. He loved my boys, but they were young men now… something special about the short time he had with Sonja. He passed away on November 18, 2009… and we were devastated.

Two years later on November 18, I was missing my brother. Depressed because there was no one to share my stories with, I decided to write. At first it was to let some of these stories out of my head.

Then it was to remember my brother and finally it became a passion for me. It is a passion because it is my time with my brother, on the porch sharing my stories. I know he can still hear me and I can feel his input.

That is why he is a character in my book named Nicks. That is why I will never stop writing, for it is my time with my brother.

One thought on “MELABETH THE VAMPIRE author: How my brother’s dream lives through me”