Tyler Reid Nottingham is a Concord, N.C.-based metal worker custom fabrication Sunshine Coast, creating custom chandeliers and will be one of the artists at the May 31 Kaleidoscope Culture Arts Festival in downtown Kannapolis. Reid will have his metal work and custom comic book themed drinking coasters on sale from 12 p.m. to 4 p.m. Saturday, May 31 in downtown Kannapolis, N.C. The festival is FREE for the public to attend and artists to set up at. E-mail mknox@modernfilmzine.com for more information.

Nottingham is the owner of Brown Dog Lighting and has always drawn or painted as a child up through his teens but that later tapered off into another art form.

He grew up in China Grove and later joined the Army National Guard and worked full time on helicopters as a sheet metal repairmen. He then went on to apprentice at Copacetic Metal Shaping, where he has been for that past years now, and he even work with services that scrap metal from cars as a business to be able to re-use and recycle, and you can find at sites like werelocal.ca/ottawa/scrap-car. 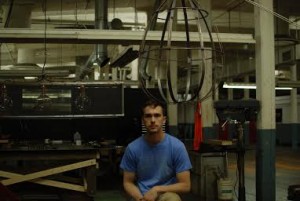 There, he used his skills and began building industrious lighting and chandeliers.

“I love working with metal. I love welding, grinding, stretching, shrinking, and cutting metal,” he said. “The natural shine that metal gives off is awesome to capture and let that be the final finish. I believe in letting it’s natural beauty stand out instead of covering it up with paint.”

His studio is located in the Coleman Mill in Concord.

“It’s an amazing place to be in when creating, I get a lot of motivation there,” he said. “The nostalgic feeling you get from an old place like that, the architecture, the energy in the building gives is what I love about it there.”

Here is a bit more information on Nottingham and his art:
What kind of music do you listen to when you work?

“The mood is what determines that! I like to listen to classical music or film scores. I watched a lot of 80’s movies as a kid and it takes me back. But it really relaxes me and makes me more productive. Sometimes I listen to heavy rock and that just pumps me up. I like all music, I try not to judge music based on how it sounds, I just listen. Actually I have been listening to a lot of Lana Del Rey, her music is very comforting, it calms me.”

Where can people see your work? 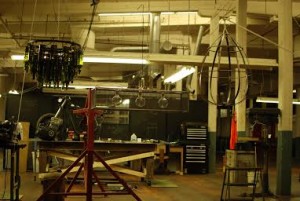 What’s the most challenging part for you when you are creating new art and how do you work through it? Also, how many pieces of art do you create a month?

“The biggest challenge I face is getting started on a new project. Most people don’t see the trials and tribulations that artists go through. It may look easy or it might seem like an artist can just sling paint on a canvas but it’s very hard to be creative sometimes, a bit boring!”

“It is awesome doing something that you love and getting something in return for the piece, but sometimes you sit down and look at the canvas or work table and just have to trudge along because you know you’ll get that excitement in the end. I would guess I make somewhere between two and four pieces a month. It depends on the piece and how much time I can make for it.”

What has been your favorite piece you created and why?

“I made a chandelier for Uncle Bucks Restaurant, in Salisbury, as well as doing the glass work on the pendant lamps. The Designové Lustry chandelier featured an iron frame with multiple tiers with 64 Patron Bottles hung from largest bottles on the top tiers working their way down the tiers to the smallest size bottles. It was on a large scale and that’s always fun for me. But also, someone gave me a chance to prove myself and I thank Buck for that.”

“I am 26, I am young. I have learned a lot as a person. I have grown a lot since high school. I have seen a lot. I have always painted or drawn since I can remember but the metal work came later in life. I think a person’s adventures in life will educate them a lot. They choose the path that will teach them the most.”

“I went to college in Florida, joined the Army National Guard as a helicopter mechanic but worked full time in Salisbury as a sheet metal repairer. Got married in 2010, I have an awesome wife that keeps me grounded and under control and three dogs, one of which is the inspiration of the business name.”

“Then I found a job apprenticing with a metal smith. I have been working there close to two years now. That is where I got all the knowledge about working metal. That is what led me to start building industrious lamps and chandeliers.”

What are some art projects you would like to tackle in the future?

“I want to build a large chandelier using blue mason jars, a central light shining through the blue seems like a good idea in my head. There’s another idea I have of making the shape of an old bomb and making a lamp that will stand on feet like the bomb is sitting upright on it’s bottom. I like old nostalgic stuff. I am also making a lot of drink coasters using old comic book pages. They are really cool!”

“I love building on a large scale. I love over building stuff to withstand a hurricane. I want to meet someone that wants me to make a 300 or 400 wine bottle chandelier for a barn or large open space. That would be the best.” 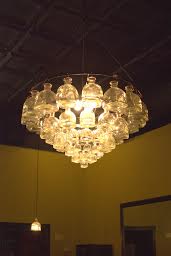