Grammy nominated performer Jimmy Harrison will perform at the Sept. 27 Kaleidoscope Cultural Arts Festival in downtown Kannapolis. He will perform with his wife Darlene Harrison who has sang with American Gospel singer and pastor John P. Kee. The duo will perform 12 p.m. to 1:30 p.m. Saturday, Sept. 27 in front of Sunshine’s Asian Cuisine, 215 W A St, Kannapolis.

“Kansas City” drummer Jimmy Harrison, also known as Lenny Curtis, who played on the song with his brother Wilbert.

Harrison was also a member of the famed RCA’s recording artist label, the Fabulous Fiestas for which they enjoyed great success with their hit, ‘So Fine.’ He was also known during the Motown hey days as Lenny Curtis with hits such as “Nothing Can Help You Now” and “Who You Gonna Run To” on END records and it continues to be a hit in the UK today.

Taking on another persona as ‘Geronimo & the Apaches with Galiko Records and the single titled, “Too Late For Tears & Oh Yes Baby I Love You So.” He also had recording performances with another sibling & was called “The Harrison Brothers” & “Jim & Bob Harrison.”

Harrison was also a writer and arranger for Motown Records. He continues his talent in the gospel arena and was a featured artist on the Tyscot Record label with his cousin, the Prince of Gospel, Pastor John P. Kee. Their duet recording of the song, “Be Ready” (Inner City Mass Choir) was nominated for a Grammy Award in 2000. 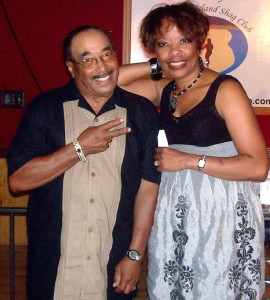 He will be performing at the Sept. 27 Kaleidoscope Cultural Arts Festival with his wife, Darlene Harrison.

Darlene Harrison has been surrounded by gospel music her entire life and entered her first recording studio at 14. She recorded for the first time at the Arthur Smith studio, now known as StudioEast Recording, Inc.

A few years later, she joined in with their family group, the Hogan Family Gospel Group and was a featured regular on “The Lester Strong Show.” In recent years she has also performed with Pastor John P Kee and the church choir scoring tremendous hits such as “Mighty in the Spirit,” “Sanctify Me” and Tommy Boy Gospel’s “I Found the Answer” with New Divine Destiny.

The Charlotte couple play classic music and even had a #1 Beach Chart single with “Keep Movin’ On.”

Kannapolis Arts would like to thank our sponsors for the Kaleidoscope Cultural Arts Festival: the North Carolina Research Campus, the City of Kannapolis, Downtown Kannapolis Inc., the Independent Tribune, Omega Graphics and the Cabarrus Arts Council.