Concord-based artist Louise Farley, with ClearWater Artist Studios, will be a featured artist all September with her work on display at the Stanly County Agri-Civic Center in Albemarle.

Farley, a figurative painter, she works out of her studio at the artist-incubator, the ClearWater Artist Studios, 223 Crowell Drive, Concord. She has been a part of the City of Concord operated studio for three years.

Her show will run through Sept. 30 at the Stanly County Agri-Civic Center, 26032 Newt Rd, Albemarle. The show is coordinated by the Stanly Arts Guild, housed in the Falling Rivers Gallery in downtown Albemarle. This show will feature Farley’s “Mexico” and “Montreal” painting series. 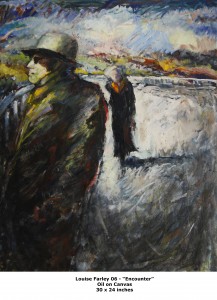 Her “Montreal Series” stems from a single afternoon with her husband and stepdaughter, who took many of the photos that serve as source for the paintings. The “Mexico Series” is a collection of images from a trip to San Miguel de Allende.

Farley’s paintings are loosely realistic with bright colors, evocative faces and stylistic use of runny drips and atmospheric brushstrokes.

“I like to evoke feeling and motion, and sometimes humor in my paintings,” Farley said. “I leave some things to the imagination. The photographs are just a jumping-off point.”

Farley has been painting for 10 years and teaches as a guest instructor at John C. Campbell Folk School in Western North Carolina, and gives private lessons. She holds a Bachelor of Fine Arts from University of Tenn. in Knoxville.