When I graduated from high school, the only thing I knew for certain, was that I really loved art.  I researched colleges all over the country.  I secretly had my heart set on one down in Georgia.  Those dreams came to a halt when I realized the difference in expense for an out-of-state college paired with my mother’s intense desire for me to remain close by.  Ultimately I was accepted into UNC Charlotte, only about an hour away from my home town.  The summer before college began I was a whirl wind of nervous energy.  I had no idea where I would end up or what I would do there.

My friends threw me a party to bid me farewell. While at this party though, I managed to step into a mole hole and hyper-extend my leg.  This means that my leg literally bent the wrong direction at my knee joint.  When I fell, the joint popped back together in a movement resembling a sling shot and caused me to fracture my knee cap.  I immediately went into shock.  This is the only time in my life, fortunately, that I can remember screaming in agony without any sound actually leaving my body.  I could not move or speak.  I could only lay there trying desperately to understand why no one could hear me.  Finally someone noticed me on the ground and carried me into the house.  My sister came to pick me up and my pants had to be cut from my body because my leg had become so swollen.  I was driven to the Emergency Room where I was x-rayed and fitted for a soft cast.  Later I had to have a full body cast, meaning from the top of my hip extending all the way to my toes.  This cast did not have a bend and therefore I could not use crutches.

When I finally made the move to UNC Charlotte, I was in a motorized wheelchair.  The kind that requires excellent joystick skills. This presented so many challenges.  First off, my dorm room was located on the 8th floor of an old building with an elevator that malfunctioned frequently.  My family came and with their help we managed to get all my belongings inside and unpacked.  It wasn’t until a week or more that my RA came knocking to tell me that I was a hazard and would need to re-located to the first floor to ensure that I could escape in the event of a fire or other emergency.  Luckily though, when I told the RA that she would have to move all my stuff for me because I could not physically do it, that tune changed and I was allowed to remain where I was.  I was thrilled not to have to move my things, but ultimately I paid the price when my pain medications left me so soundly asleep that I missed several fire drills.  As many of you probably know, you get fined for missing a dormitory fire drill.

The second obstacle was learning how to take a shower with my leg stuck in a cast that could not get wet.  I ordered a rubber boot that I had to yank over the cast and then suction closed at the top using a vacuum maneuver.  Subsequently I had to use my desk chair to hop my way down to the community bathroom and attempt to shower on one leg.  By the end of the school year though, someone had actually stolen my chair from the community bathroom and you guessed it, I was fined for that as well. 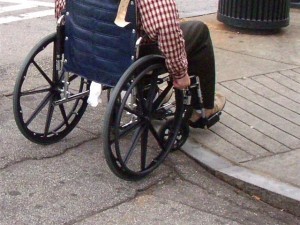 Now, when you are using a motorized wheelchair and you have to cover long paths across a major University, the first step is locating the Student Disabilities Office.  There they give you a not so handy map that has tiny little red dots signifying the locations of dips in various sidewalks.  When you live your life in a wheelchair, learning where to get on and off of a lifted sidewalk is a top priority.  On one of my first attempts I actually broke down in tears until a fraternity came waltzing by and graciously lifted me onto the sidewalk.  Once on the sidewalk , I had to locate the right buildings and pray they had a handicapped accessible door that functioned properly.  I can still remember that 10 minute frenzy that occurred between classes.  When I hit the button on the wall that signaled the door to open automatically, a herd of rushing students would fly through and the door would close again before I could make my way.  I felt completely invisible.  It was my first year of college…  and I was invisible.  Well, except for those occasions when my class took place in an auditorium with stadium style seating.  On those instances I was VERY VERY visible to everyone in the room because I could not get to a desk and instead had to bunker up next to the professor.  JOY!  It took several weeks for me to get my classes scheduled because I could not actually get to several of them.  You may be thinking that public buildings/schools are required to be handicapped accessible and you are mostly correct.  On one particular occasion when I was trying to reach a class on the second floor I quickly realized I could not fit into the elevator.  I was sitting at 90 degrees in my wheelchair and because my cast could not bend I had to leave it extended out in front of me.  On my first attempt in this elevator, no matter what I did, the door would close on me or my leg!  So I call my teacher and the Student Disabilities office and begged for leniency.  They moved me to a new class and I was immediately behind on my assignments.

I remember people asking me, in spite of the bright blue cast on my leg, whether or not I would ever be able to walk again.  They actually thought I was handicapped.  While feeling sorry for me was a common reaction, completely ignoring me was as well.  I couldn’t go out to clubs, I couldn’t go to parties, and I couldn’t go to a basketball game and camp out for tickets.  I was stuck in every single way imaginable.  That year I spent almost ALL of it in a wheelchair.  It took approximately 8 months for the bone to grow back.  I was severely depressed and gained around 60 pounds.  It was then, in that year, that I decided I was going to be a social worker.  I suddenly viewed the world through a new lens and I wanted to help all those people out there who were struggling to get through each day.  The ones who just wanted to be able to do the things everyone else did so freely.  The ones who are invisible.  I decided then and there that I was going to help people.  I wasn’t exactly sure how, but for the moment, I had a purpose.

You can also check out some of my artwork at www.justbaileydesigns.com!