Kaleidoscope Cultural Arts Festival returns to downtown Kannapolis, N.C. from 12 p.m. to 4 p.m. Saturday, May 31. The festival is free to attend and free to set up as an artist if you register at mknox@modernfilmzine.com

KANNAPOLIS, N.C. — Every once in a while you get completely caught off guard and taken totally by surprise … in the best way possible.

At least that was the feeling of several of the volunteers behind the Kaleidoscope Cultural Arts Festival in downtown Kannapolis this past Saturday. It’s only the second year organizers with the Kannapolis Arts group have put the festival together and April 26 was the first of four festivals this year. About 90 artists and performers participated with a total of about 500 people enjoying arts and culture in downtown Kannapolis.

The festival included belly dancers, sci-fi themed paintings, a juggling clown, live painting, different bands playing music, pottery, crochet, quilts, tye dye clothes, Irish dancers and even an actor from a classic TV series. John Voldstad, who played the “other brother Darryl” on the “Newhart” show as well as acting in the Bill Murray comedy “Stripes,” set up at the festival with his son, artist Christiaan Voldstad.

Between the artists, performers and guests there was plenty for visitors to enjoy with a festival that’s growing and going into full swing.

But we still have a long way to go, building that crowd up, with our next event being the May 31 Kaleidoscope Cultural Arts Festival in downtown Kannapolis. As a grassroots group, who had a budget of less than $50 to work with, I’m pretty happy with us having about 500 people come to Kannapolis to celebrate arts and culture.

Especially since I know those numbers are only going to grow as word of mouth gets out. Because one thing everyone saw at the festival was the diversity of the crowd. We had the young to the old, punk rock kids, hippies, yuppies and everything inbetween, including one billionaire.

David Murdock, the billionaire who developed the North Carolina Research Campus, visited the festival and showed his support by buying art from many of our vendors. It was a great surprise and something our crew definitely appreciated. And Mr. Murdock seemed to appreciate the diversity of our artists.

A diversity we had because we do not charge artists to set up. We do not allow people to bring in massed produced items like Scentsy or Tupperware, but homemade crafts, paintings, wooden toys, if you build it or make it from scratch, we let you set up for free for this street festival

It’s funny, because when we started a lot of people were asking, “Why do it for free? You should at LEAST charge $10!” And the people that asked that have obviously never been a starving artist, were $10 could be all you have for a week. I know that was the case when I directed my circus documentary, “Tearing Down the Tent,” and was working at a movie theater, living off of $700 a month so I could work on the movie.

The benefit of living in poverty? Knowing that artists don’t always have “just $10” for a registration fee for a festival. And the result of not charging has been awesome, with having about 90 artists set up, many setting up their first festival EVER, because they took the gamble on setting up, since it wouldn’t cost them anything but a few hours.

The other reason not to charge? A lot of the artists that came out were young, and didn’t exactly have a lot of “spending” money to just put down on a new festival. Since it didn’t cost them anything artists in their late teens and early 20s came out and set up. One of the best compliments the Kannapolis Arts team received was when several people commented on how many young people were out, enjoying themselves in downtown Kannapolis. Many of which were selling their art for their first time.

And though not everyone sold art, at least it didn’t cost them much more than time and gas money to at least give it a try. All in all, the feedback was pretty positive, especially with David Murdock coming through.

“Thank you for allowing me to attend today I had a blast! And I was also floored that Mr. Murdock bought EVERY handmade afghan that I had brought for and elderly lady who couldn’t make the event! Can’t wait til the 31st, I will definitely be there!!!!” 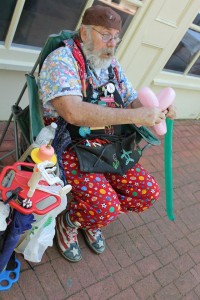 And even if  artists didn’t make huge sales, they seemed to have a good time.

“This show was spectacular. Lots if great vendors and entertainment. Even though it wasn’t my best show, I made great contacts. Thank you for all your hard work,” another vendor said.

That was one thing EVERYONE commented on, was how they made contacts. It’s why I started this festival in the first place. As a reporter for the Independent Tribune I kept meeting all these amazing, creative people, who just weren’t aware of the other creative and amazing people in our community. There are plenty of excellent artists here in Cabarrus County, just hidden away, like gems waiting to be discovered. 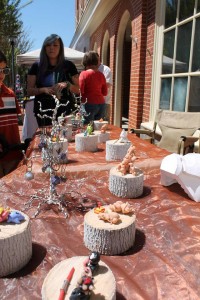 Kaleidoscope Cultural Arts Festival is still a relatively new event, with this being our second year and a grand total of five festivals, so many artists don’t even know about us yet. That being said, we had 16 vendors from Kannapolis and 11 from Concord who set up at our festival. Which means there are plenty more out there, waiting to find out about the festival and meet all the other local artists.

It’s going to be fun discovering them and their work!

You can visit www.KannapolisArts.com or https://www.facebook.com/KannapolisArts to keep up with arts and culture activities in Kannapolis and Cabarrus County. You can also contact Kannapolis Arts co-founder Michael Knox at mknox@modernfilmzine.com or 828-231-5037 to learn more about the Kaleidoscope Cultural Arts Festival series. The next festival is from 12 p.m. to 4 p.m. Saturday, May 31 in downtown Kannapolis, on West Avenue. 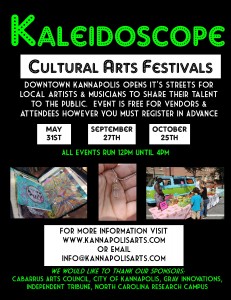